Six isn’t enough for them: They’re getting one more (And had actually wished for three more). Yes, we’re talking about Hollywood’s superstar couple Angelina Jolie and Brad Pitt (Brangilina, if you will).

According to latest reports, Angelina and Brad are said to be expanding their brood of six by adopting yet another child, this time a Syrian orphan. The child is said to be one of three brothers, Angelina had met while on a mission to the country.

Read: 5 reasons why this was Angelina Jolie’s iconic year

Reports indicate that the 38-year-old actor, who is a UN Special Envoy for Refugee, went on a solo trip to Syria in June, 2015, and after seeing the three orphaned brothers, was heartbroken and wanted to adopt them all. The brothers were orphaned after their father was taken away by soldiers and their mother killed in a bombing incident. 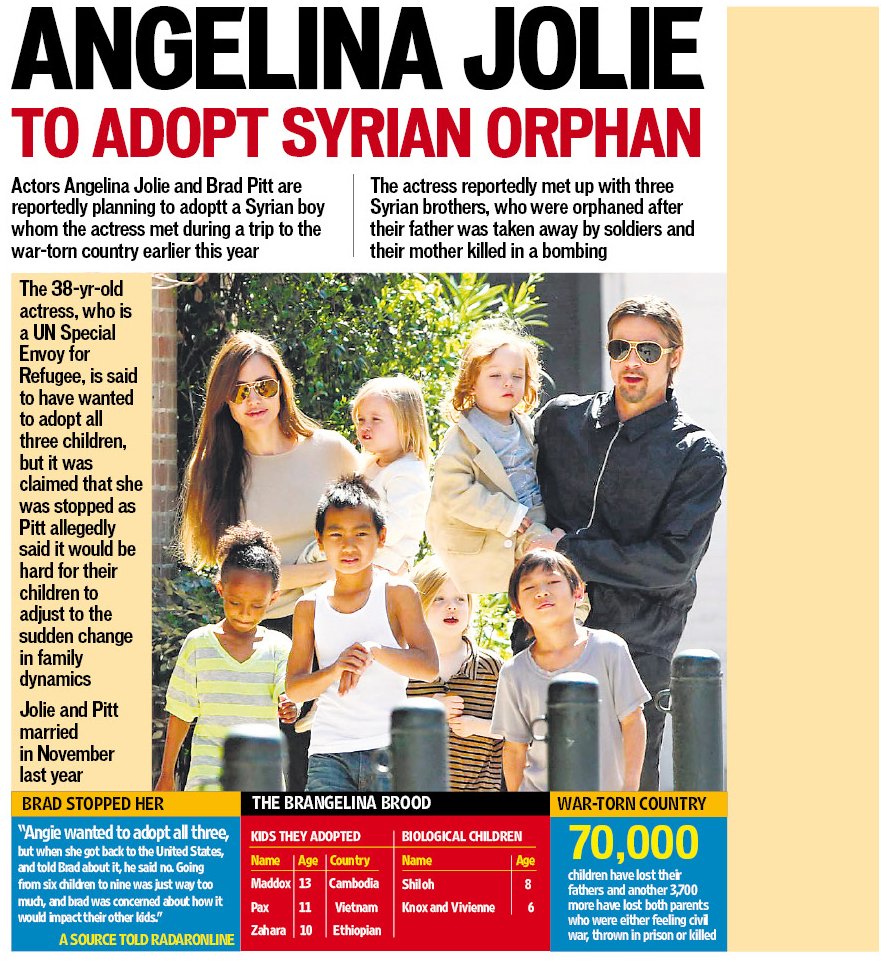 The star parents were apparently first planning on adopting a girl child from Syria. However, after meeting the boys, Angelina is said to have wanted to adopt all three of them. But it was claimed that she was stopped as Brad reportedly suggested it would be hard for their children to adjust to the sudden change in family dynamics.

"Angie wanted to adopt all three, but when she got back to the United States, and told Brad about it, he said no," a RadarOnline source has claimed.

"Going from six children to nine was just way too much, and Brad was concerned about how it would impact their other kids. But Angie didn't put up a fight. She knew it just wouldn't work. But they compromised at adopting one." Angelina and Brad are already parents to six children, three biological including Shiloh, eight, and six-year-old twins Knox and Vivienne, and three adopted, Maddox ,13, from Cambodia, Pax, 11, from Vietnam, and Ethiopian Zahara, 10. And at this rate, they could soon start their own football team!

The Mr and Mrs Smith co-stars are currently going through the formal requirements to welcome the boy into their lives.

Nevertheless, it could take a few months for all the paperwork to go through before Brad and Angie adopt a new son or daughter. In any event, the family is set to get bigger soon enough!

Pieces of a Woman movie review: Simply brilliant, if you can get over Shia LaBeouf’s problematic presence – hollywood