San Diego County Sheriff Bill Gore has been cracking down on COVID-19 rule breakers for weeks.

When coronavirus cases in California began surging again in November, Gore launched a team of deputies to make sure people were complying with statewide public health orders, including staying away from restaurants, fitness centers and large gatherings.

“I get a lot of emails and a lot of pushback,” says Gore, whose office has issued about 150 citations for COVID-19 violations since the pandemic began. “But this is a public health crisis. I’m doing what I think is right.”

Less than 100 miles away in the neighboring county, his counterpart fiercely disagrees.

In a Dec. 4 video he posted on Twitter, Riverside County Sheriff Chad Bianco slammed the state’s latest mandate that bans personal gatherings and closes non-essential businesses in areas where the virus is surging, adding that his force would not be “used as muscle” against residents to enforce “disastrous” rules.

“These closures and stay-at-home orders are flat-out ridiculous,” Bianco says.

Read more: There Will Be No Safe Havens in COVID-19’s Final Assault on the U.S.

When it comes to enforcing COVID-19 restrictions, similar scenes are playing out across the country. In California alone, Bianco joins more than a dozen police and sheriff departments in saying they won’t enforce the mandates. Despite increases in COVID-19 cases and hospitalizations, several law enforcement agencies in New York and New Jersey have refused to enforce public health orders that cap residential gatherings at 10 people.

As the holidays approach and the U.S. death toll from COVID-19 surpasses 317,000, health officials say it’s more important than ever to follow state and federal guidelines to slow the spread of the virus. Any division on enforcement policies, especially in neighboring jurisdictions, threatens to weaken the efficiency of the public health order, according to Dr. Amesh Adalja, a senior scholar at the Johns Hopkins Center For Health Security, who specializes in infectious diseases. 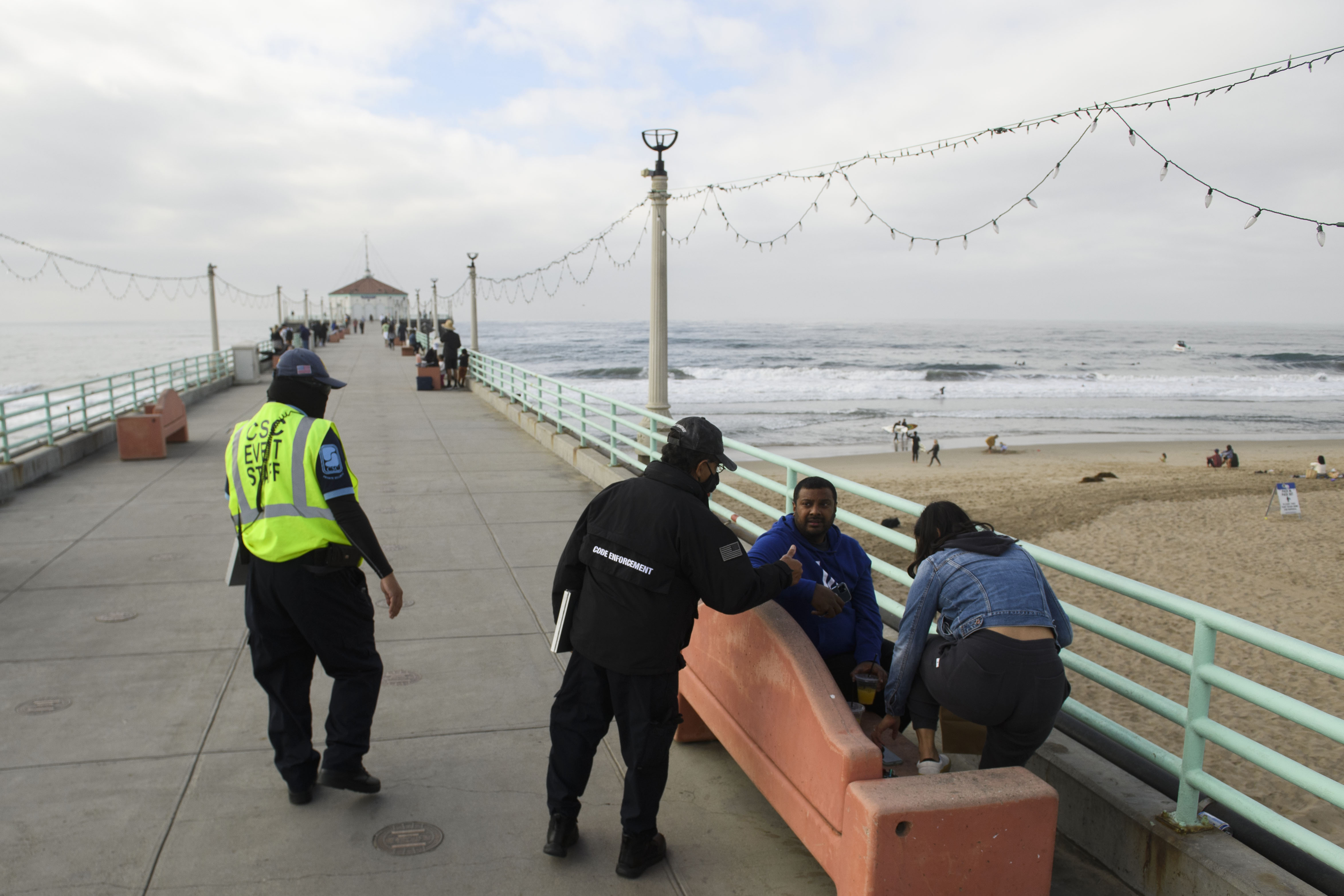 But for law enforcement leaders, it’s nearly impossible to make sure residents comply with ever-changing public health policies, largely due to potential constitutional issues and a lack of resources. “It’s unenforceable,” says Kehoe, adding that law enforcement officers would need a warrant to enter a private home to break up a private party. In many major cities, including Houston, police are also juggling increases in violent crime. “The last thing we need is for someone to call us at a local supermarket because someone is in there acting a fool,” says Houston Police Chief Art Acevedo.

Some police chiefs also worry that enforcing the mandate would inflame tensions that already are high in the wake of George Floyd’s death in May. Fearing that police intervention would be “detrimental” to community relations, New Jersey’s Howell Police Chief Andrew Kudrick directed his officers on Nov. 19 not to respond to complaints about mask-wearing or social distancing unless the violation was “egregious,” such as a “packed house party.” Responding to the minor complaints would “put officers in a no-win predicament,” even if their enforcement was justified, Kudrick said in a statement.

Reports: Race Plays a Part in Policing the Pandemic

There are already concerns that pandemic policing has been uneven. In New York City, out of the 374 summons issued from March 16 to May 5 for violations of “emergency procedures and acts liable to spread disease,” 304 were given to Black and Hispanic people, according to NYPD data. Nationwide, people of color were 2.5 times more likely to be punished for violations of COVID-19 orders than white people, a recent report found. The report, published by the nonprofit Community Resource Hub for Safety & Accountability, collected data on pandemic-related arrests and citations using mostly news reports from March through August.

Andrea J. Ritchie, one of the report’s authors, says COVID-19 restrictions are consistently enforced unfairly against people of color, who are already bearing the brunt of the pandemic. “They have in fact perpetrated the same racial injustice that produced an uprising this summer, the biggest one the United States has ever seen,” Ritchie says.

Read more: One Month Inside a New York City Hospital as a Virus Took Over the World

In the wake of Floyd’s death, activists pushed to defund police departments and shift some of their responsibilities—including intervening in domestic disputes—to other groups, including social workers. But asking police to step in to fine people for violations like not wearing a mask in public seemingly contradicts that, according to Houston’s police chief. “We have all these rules across the nation that folks want enforced, which really run contrary to the narrative that we should be doing less,” Acevedo says.

In a unique move, Houston officials agreed to delegate some COVID-19 enforcement duties to the city’s Fire Department. While the police tackle violent crime, firefighters are now tasked with making sure bars and restaurants are adhering to occupancy limits. “The police department has taken a secondary role,” Acevedo says.

It doesn’t help that Americans are getting mixed messages on the federal level. In its guidelines for holiday celebrations, the U.S. Centers for Disease Control and Prevention said gathering with people outside the same household can increase the chances of getting and spreading infection. The agency encouraged those planning to host or attend large events to “consider the risk of virus spread.”

Organizers of the nation’s biggest New Year’s Eve party in Times Square heeded the advice, announcing that no revelers will be able to watch the ball drop in person this year. And appointments for 5-minute viewings are needed to visit the world-famous Rockefeller Center tree in Manhattan. The Macy’s Thanksgiving Day Parade, usually a huge draw for tourists and locals, went virtual this year.

But in the White House, President Donald Trump’s administration has hosted holiday parties, including a Hanukkah celebration on Dec. 9 that had 200 guests. “If you can loot businesses, burn down buildings, engage in protest, you can also go to a Christmas party,” White House press secretary Kayleigh McEnany told reporters in December in response to criticism of the events.

Polarizing political views across the nation have made it tougher to find uniformity. In extreme examples of defiance, the owners of a New Jersey gym have been arrested and reportedly fined more than $1.2 million for refusing to close their doors. And a Staten Island, N.Y., bar manager, who’s been accused of repeatedly ignoring pandemic restrictions, now faces charges after allegedly striking a sheriff’s deputy with his Jeep while trying to flee from authorities on Dec. 6. In Hawaii, authorities arrested a couple who allegedly flew home from California on Nov. 29, knowing they had COVID-19.

Meanwhile in San Diego, Sheriff Gore remains frustrated that there hasn’t been more collaboration, especially as the upcoming holidays exacerbate the crisis. With more than 1.8 million confirmed cases and more than 22,000 deaths, California is seeing the largest surge in COVID-19 cases since the start of the pandemic, according to state health officials. On Dec. 15, California Governor Gavin Newsom said the state had ordered 5,000 body bags to distribute to hard-hit areas, including San Diego, and has dozens of refrigerated trailers ready to act as makeshift morgues. A day later, California reported more than 53,700 new COVID-19 cases within 24 hours.

Gore says public health mandates would be more effective and easier for Americans to accept if “everybody’s on the same sheet of music.”

“But,” he says, “when you look around this country, we’re not there.”

The Coronavirus Brief. Everything you need to know about the global spread of COVID-19


For your security, we’ve sent a confirmation email to the address you entered. Click the link to confirm your subscription and begin receiving our newsletters. If you don’t get the confirmation within 10 minutes, please check your spam folder.

We’re in the Third Quarter of the Pandemic. Antarctic Researchers, Mars Simulation Scientists and Navy Submarine Officers Have Advice For How to Get Through It

After the Pandemic: Are You Ready for the Old Normal?