Seven months of strategizing, $18 billion in funding and it’s all come down to this. Now that scientists at the Food and Drug Administration (FDA) have authorized Pfizer/BioNTech’s COVID-19 vaccine, the U.S. government has cleared the way for the distribution of 2.9 million doses to the American public.

It’s just the first round of shipments in what will be a months-long process to inoculate some 300 million Americans. The decision Friday night sets in motion a vast logistics chain designed to reach each corner of the country. It took meticulous planning to meet the challenge of delivering a sea of doses at controlled temperatures so doctors could administer shots as soon as next week.

The blueprint for the national strategy is represented in a dozen maps and charts Scotch-taped to the walls of a seventh-floor office in downtown Washington, D.C., where General Gustave Perna and his team leading the government vaccine effort have devised the logistics operation that they hope will change the trajectory of American history. In an interview with TIME this week before FDA authorization, Perna compared vaccine delivery day to the Allied invasion of Normandy during World War II, an event more commonly known as “D-Day.” He uses the same term when discussing plans for the day Pfizer will begin delivering America’s first shipment of vaccines. “This is a game changer,” he says. “Not to dramatize the situation we’re in, but we’re at war with this virus. And the vaccine is the beginning of the end.”

The countdown to Perna’s personal D-Day began in May when he was put in charge of logistics for the federal vaccine program, dubbed Operation Warp Speed (OWS), an unlikely collaborative effort led by the Department of Health and Human Services (HHS) and the Department of Defense to develop, manufacture and deliver COVID vaccines to Americans. The four-star Army general was tapped because of his 39 years of service as a logistics officer, most recently as commander of U.S. Army Materiel Command which oversees the branch’s global supply chain.

The need for a vaccine has grown increasingly urgent over the past week. On Friday, the U.S. reported 3,309 deaths, the highest toll in a single day the country has seen to date, according to Johns Hopkins University. The grim tally broke the previous record set Wednesday at 3,124. The number of patients hospitalized with COVID reached 108,000, according to the COVID Tracking Project—also a record, one that’s created critical shortages in about 1 in 8 U.S. hospitals, HHS data shows.

An FDA assessment made public Dec. 8 shows Pfizer’s vaccine is around 95% effective in preventing COVID-19 disease, and on Dec. 11, the FDA formally issued emergency use authorization of the shot. The vaccine is already authorized for use in the UK, where it was administered this week for the first time; it’s also been approved in Canada where the first shots are expected next week.

Here in the U.S., thousands of vials of the vaccine, stored at -94°F in ultra-cold freezers from the Pfizer plant in Kalamazoo, Mich., are being loaded into customized containers packed with sensors, tracking devices and dry ice. The boxes will be stacked onto delivery trucks, and later cargo planes, that will transport the vaccine to 636 locations across the nation in initial shipments. “Make no mistake, distribution has begun,” Perna said during a Saturday news conference. “Right now, boxes are being packed and loaded with vaccine with emphasis on quality control.”

Vaccines weren’t prepositioned because Perna says he didn’t want to “presume” the FDA’s authorization. Pfizer is using UPS and FedEx as its primary distributors. The deliveries will be closely guarded by local law enforcement, meticulously tracked by GPS and temperature-monitored to ensure the vials in each container remain ultra-cold, far below normal freezer temperatures. If the vaccines deviate from their target destination, or if the vials get too warm, the company is alerted.

Perna says he expects 145 pharmacies, hospitals and clinics to receive doses Monday, 425 on Tuesday and the remaining 66 on Wednesday. Health workers at each recipient sites must personally sign off on delivery. The government and distributors say 24-hour hotlines have been established in case of any trouble.

A software platform called Tiberius, specifically developed for the distribution of COVID-19 vaccines, enables states and federal agencies to see their orders and track their vaccines. The program covers 50 states, eight territories, the Veterans Health Administration, the Bureau of Prisons, the Indian Health Service and the departments of Defense and State. Perna already directed the distribution of alcohol wipes, diluent, syringes and needles, which are needed to administer the vaccine, ahead of the actual doses in order to expedite the process. He expects the first round of shots will be delivered within four days of FDA authorization. “We are pushing, because we want to have fair and equitable distribution to all the American people,” he tells TIME.

The government has not publicly detailed how many doses are being delivered to each state, but Perna and his team say the allocation is based on the states’ adult populations. In the initial push, 2.9 million doses will be delivered while another 3 million are held back for patients to receive their second dose, as required, 21 days later. The remaining 500,000 doses that the U.S. government has purchased from Pfizer and are already manufactured will be held in reserve, Perna says, in case of an accident, bad batches or another unforeseen circumstance.

The first recipients of the vaccine doses will be health care workers, including people who work in hospitals, long-term care facilities, home health care, pharmacies, emergency medical services as well as in public health, and older Americans living in skilled nursing or long-term care facilities. The vaccine is not expected to be widely available to most Americans until springtime. 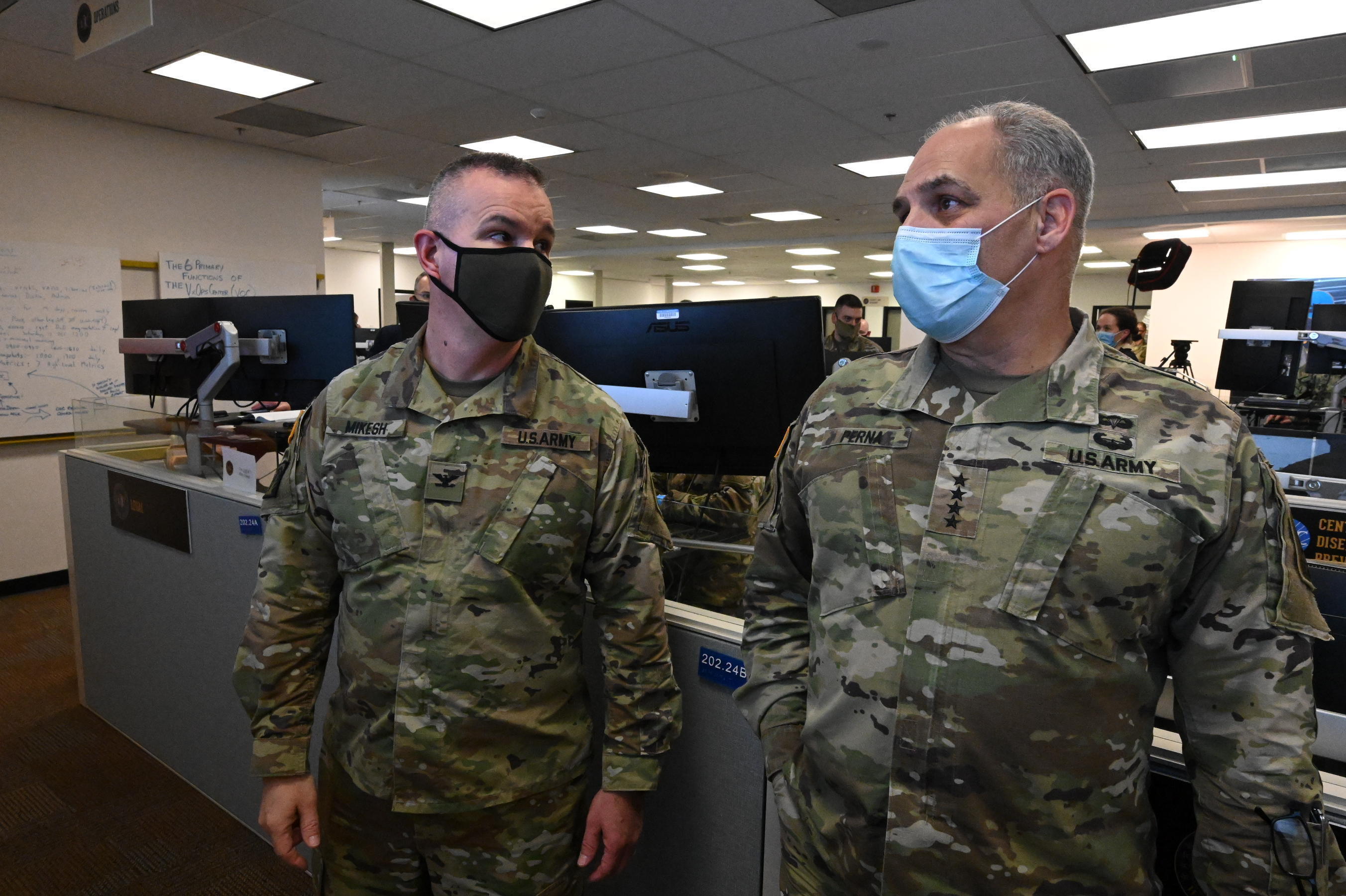 Over the past seven months, Perna coordinated with HHS, handpicked his staff and familiarized himself with the practices, players and perplexing jargon of the medical world. He toured manufacturing and distribution locations around the U.S. with Dr. Moncef Slaoui, a co-leader on OWS. Like a conductor of an orchestra, he directed companies and states to work in concert to ensure inoculation plans were formulated and executed.

However, Perna served in the Army long enough to know that battle plans always appear perfect until bullets begin flying. “Do I see a flawless execution? No,” he says. “I’ve been in bad situations. It’s what you do after the situation hits that makes a difference, right? I mean, it’s what our fathers and mothers have told us since we were children. ‘That was bad, get back up. And face it and move out.’ My thing to the staff is, ‘stay calm, see yourself, understand the facts of the situation, figure out a solution, and then implement it.’”

In his office, near Capitol Hill, Perna’s desk has neat stacks of color-coded graphs, bar charts and other paperwork, reflecting the latest statistics related to the vaccine effort. Atop all this, though, is a black tile with white lettering that says: “Failure is not an option.”

And yet, success is far from certain. The first vaccine deliveries happen to coincide with the holiday season—the busiest shipping weeks of the year in the country. The crush on UPS and FedEx is intensified by the fact that Americans are opting to buy online for home delivery rather than risk exposure during the pandemic.

“So, can we make the problem any harder than we’ve already made it? It’s Christmas time,” Perna says, smiling behind his surgeon’s mask. “Here’s what I know: I’ve sat with all the companies and I’ve put the updates I received on par with any military update I’ve received. I am convinced of their planning. And I don’t think anybody’s going to get upset that a Christmas present was a day late because we were shipping vaccines.”

The Coronavirus Brief. Everything you need to know about the global spread of COVID-19

For your security, we’ve sent a confirmation email to the address you entered. Click the link to confirm your subscription and begin receiving our newsletters. If you don’t get the confirmation within 10 minutes, please check your spam folder.

Write to W.J. Hennigan at william.hennigan@time.com.

Domestic Violence is a Pandemic Within the COVID-19 Pandemic

How Can I Get My Roommate to Take the Pandemic Seriously?